What Makes a Computer Smart?

Welcome to the Micro Age Part 3 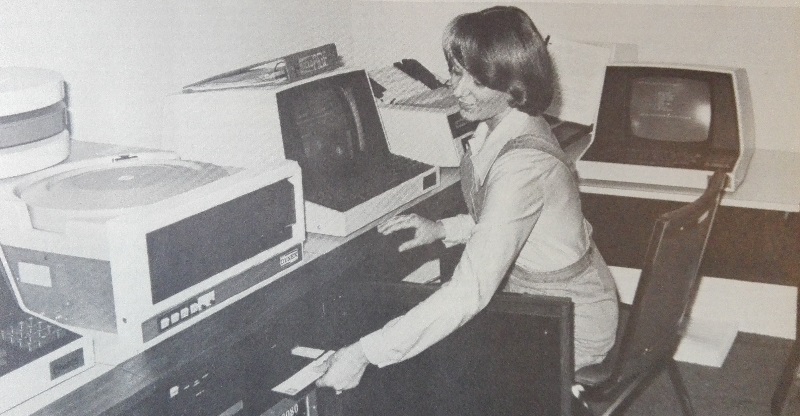 « Let us for a moment consider the microcomputer as a creature of awareness.

Without certain electronic components present in a computer to make it respond to the human user, it would seem dumb indeed. Content to blink its lights at you forever, the computer won’t even acknowledge your presence unless it has been programmed to do so.

One reason for this is that the majority of microprocessors do not have a built-in memory; calculations can be done, but other devices must be attached to the processor so that the results can be remembered, recalled and displayed for use by humans. The bare-bones computer has awareness but no understanding or learned memory.

The most common (and least expensive) kind of computer memory is called RAM (Random Access Memory); it is very fast and efficient and constitutes the bulk of a computer’s thinking memory, but has unfortunate quirk: when you turn the computer off, RAM memory forgets all it knows. So a small amount of another kind of memory called PROM (Programmable Read-only Memory) is needed in the computer. PROM does not forget what it knows when the computer is turned of, and the PROM gives the computer a kind of personality (usually called the “Monitor”) and enough understanding of its environment to know what external devices (such as keyboard, video terminal, printer) are attached and how to communicate the microprocessor’s decisions and computations to them.

Speed and convenience make PROM memory useful for permanently storing small amounts of information. But at 1-2 cents per character, it is expensive to store large amounts of data. Mass storage systems are normally used to store data and programs. Although slower than PROM or RAM and requiring additional equipment such as a tape recorder, mass storage devices can store information for less than a 1/50 of a cent per character. Data is stored on punched paper tape, cassette recording tape or record-like floppy disc and can be readily read back into the computer’s RAM (thinking) memory. The cost of mass storage systems increases as the speed of data transfer and searching increases. Typically, paper tape and cassette recording tape can be read into the computer from 10 up to 1000 characters per second, but may require several minutes to locate specific information. Floppy disc can transfer data at rates up to 1,000,000 characters per second and can find specific information in fractions of seconds.

The communication of binary information stored in the computer into printed characters easily understood by humans (and the reverse) is the function of the Serial and Parallel Input/Output circuit boards featured in this catalog. “Interface” is the term used to describe thistwo-way transformation of human-readable information to machine-usable information and back again. »