The Mac is Here

The Making of Macintosh (Part 4) 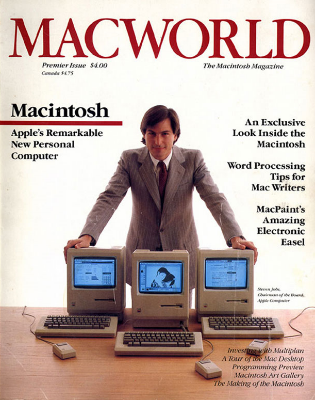 « The Mac is meant to supplant the PC on the desks of corporate America, just as the PC supplanted our own Apples over the last 18 months. » John Sculley

« Adam Osborne (founder of Osborne Computer Corp, editor’s note) is always dumping on Apple. […] He started getting under   my collar so much that I told him, ‘Adam, [the Mac]'s so good that even after it puts your company out of business, you’ll still want to go out and buy it for your kids’.» Steve Jobs

Finally, after spending $78 million in development costs, Apple introduced the Macintosh to a packed house at the annual shareholder meeting held in the Flint Center at De Anza College on January 24, 1984.

As master of ceremonies, Jobs pumped up the crowd with the following speech:

« It is 1958. IBM passes up the chance to buy a young, fledgling company that has invented a new technology called xerography. Two years later Xerox is born. IBM has been kicking themselves ever since.

It is ten years later. Digital Equipment Corporation and others invent the mini-computer. IBM dismisses the mini-computer as too small to do serious mini computing and unimportant to their business.

It is now ten years later. The late 70s. In 1977 Apple, a young fledgling company on the west coast invents the Apple II the first personal computer as we know it today. Apple dismisses the personal computer as too small to do serious computing and therefore unimportant to their business.

It is now 1984 [Jobs slows down his rate of speech and adds a dark, ominous tone to his voice]. It appears IBM wants it all. Apple is perceived to be the only hope to offer IBM a run for its money. Dealers, initially welcoming IBM with open arms now fear an IBM dominated and controlled future.

They are increasingly turning back to Apple as the only force that can ensure tuture freedom.

IBM wants it all and is aiming its guns to its last obstacle to industry control. Apple. Will Big Blue dominant the entire computer industry? [theaudience shouts ‘no!’] The entire information age? [no!] Was George Orwell right? [no!]  »

As the crowd screamed, “No!No!No!”, the screen behind Jobs flickered to life with the groundbreaking 1984 commercial.

“There have only been two milestones products so far in our industry. The Apple II in 1977, and the IBM PC in 1981. Today, one year after Lisa, we are introducing the third industry milestone, Macintosh” Jobs solemnly intoned.

Then Jobs went on with a practical demonstration and not only did the Mac impress the crowd with its voice synthesis, it was considerably smaller, faster and cheaper than the groundbreaking Lisa, introduced the previous year.

It had a 68000-microprocessor running at 7.83MHz, 128K of RAM, one 400K, 3.5-inch floppy disc drive, and a nine-inch monochrome display. The Mac came bundled with MacPaint, MacWrite and the Finder.

Until the last moment before introduction, Apple executives argued over the Mac’s price. As it turned out, the Mac cost $500 to build (83% material, 16% overhead, 15 labor) and the list price for the original Mac was set at $2,495. The Macintosh was now “the computer for the rest of us ,” defined as those with several grand burning holes in their pockets. In fact, it took until September 1985 to sell 500,000 Macs.

Would you like to read more about this fascinating story? I recommend reading the whole book! You can get it on Amazon:

Apple Confidential 2.0 is a great book, I've read it several times already... A must read for any Apple fanatic.

Check out this video too: