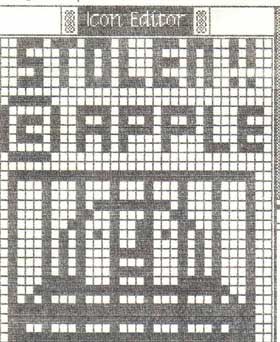 Some time ago, I wrote something about the Apple II and its clones.
In my wanderings in the network I found this article, fun and interesting.
I invite you to read it, but for the lazy or for those in a hurry I'll tell you briefly.
In practice, the Macintosh team had the clones problem in mind and Steve Jobs asked to create something, like a function hidden in the ROM, so that typing a series of characters would appear on screen to show that the ROMs were clearly copied.
The team created an icon, which was then compressed and hidden. By typing the address of the display routine the icon appears and the evildoer is unmasked.
It seems however that it was never used.

Does anyone know how to make this icon appear?