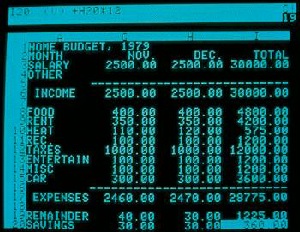 Released in the late 70s, the Visicalc was the first truly successful software. Finally a reason was found to buy a computer and luck would have it that this computer was the Apple II. In fact, the success of the latter is certainly due, at least in part, even to the existence of this wonderful software.
The Visicalc I think it is really a gem of a program, containing in itself all the challenges that the programmers of the time had to face and winning them all.

First, the idea behind it, a spreadsheet made up of interconnected cells through formulas, changing the value of a cell all the linked cells are automatically updated, really a great idea.

Secondly, the software itself does not limit the size of the sheet, if not very large, but the limit is given by the computer's memory. This means a great engineering of the software.

Third, this milestone was achieved on a machine with very small computing power and amount of memory. Indeed, perhaps it was precisely having to juggle in this handful of bytes that pushed programmers to search for the most efficient solutions.

Fourth, very short learning time. After a few hours of testing anyone is able to use it, at least in its basic functions, but surely everyone immediately understands its potential.